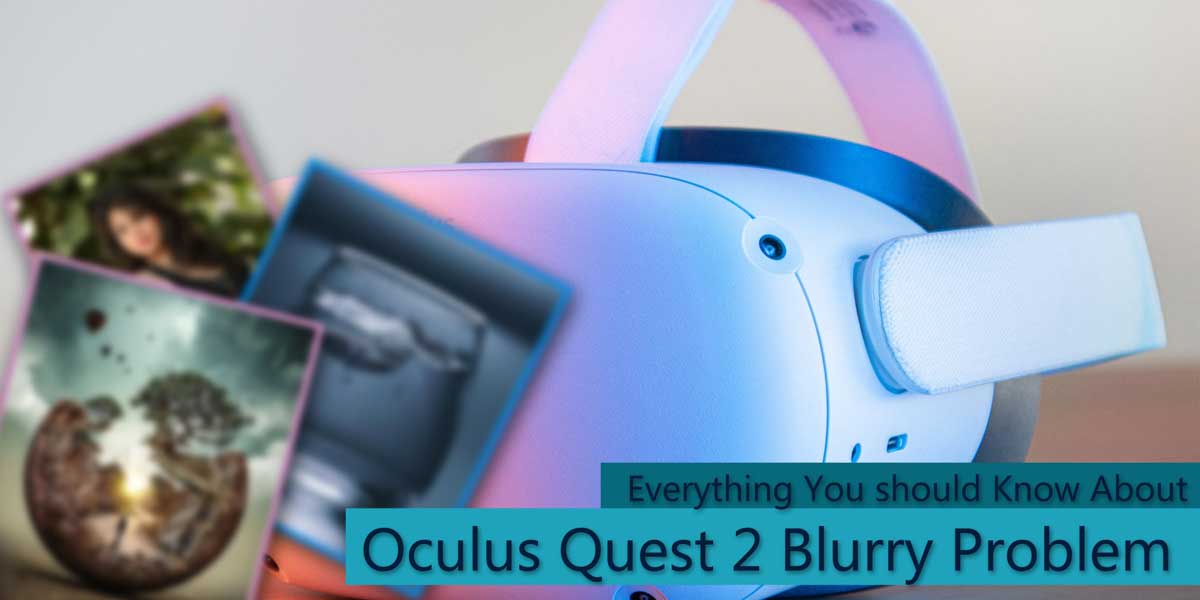 Oculus could take the Virtual reality in to a new dimension along with their Quest VR headset series. Even if the headset has just moved into the second version of the product now, most of the users have positively reviewed of the product. But, according to few negative impacts and shared reviews the blurry vision of the Oculus Quest 2 has been a setback.

However, this doesn’t have to ruin your entire VR experience as it can be fixed by yourself. This content will explain how to fix the Oculus Quest 2 blurry vision.

How Do I Know If Oculus Quest 2 Blurry Error Is In My Device?

It is not rocket science to see and understand if you oculus quest two is having the common error, the blurry vision. If you cannot read the letters on the screen, see clearly, glaring effect on the videos or you are not satisfied at all about the picture quality that will be it.

It is important to note that most of the people complain about the Oculus Quest 2 blurry effect due to some common mistakes. The dew and the dust in the Oculus Quest 2 headset, and the vision problems related to the personals are few of them. In such cases, you have wasted searching for an answer on the internet as you could have fixed t within few seconds.

How do I fix the Oculus Quest 2 blurry vision?

The first thing to remember is that you don’t have to worry of having a Oculus Quest 2 blurry VR headset. You are neither out of options nor fixes to get back the precious product you had. Here are 10 fixes that you can get a perfectly clear Oculus Quest 2 after committing.

One of the most effective things for an electrical device is the restart. Your devices video is attached to lots of components in the Oculus Quest 2 device which one of them can cause to reduce the quality of you devices video.

Cache memory file removal, resetting the Ram, removal of unnecessary files, and the resetting of the system files after sudden changes might help you to fix your devices. When it come to the best way to do that, the Oculus Quest 2 restart can perform all of these things at once. If you are facing the issue suddenly, the restart will be able to fix your Oculus Quest 2 blurry vision most of the times.

Use The Virtual Desktop Mode For A While

One of the coolest feature is delivered with the Oculus Quest 2 is its virtual desktop mode. If you feel like seeing the blurriness on the images, you will be able to get into the virtual desktop mode to find a cause. According to most of the users who had the same problem, it is a responsive way not just to the Oculus Quest 2 blurry but for other problems. If it fixes, you will be able to see videos in that mode until you find a solution.

Cleaning The Lenses Is The First Thing To Do

The sensors on the device might not be as they were when you bought it. Dust, small particles, and there can be numerous things to have deposited on the lenses. You should use a clean microfiber cloth and a lense cleaning liquid to perform to action.

You should start from the center and spread your area by expanding in a circular motion. You should make sure that the dust and other matters to get removed without leaving scratches. If this doesn’t fix your Oculus Quest 2 blurry error, you will have to go for other options.

If you are experiencing the blurriness along with the quality lack in higher values, you will be babel to fix that using settings. You should,

Using The Spectacles Along With the Oculus Quest 2 According to the manufacturer, you should not be using the spectacles to get the best experience along with the Oculus Quest 2 headset. If you use the glass space, you will not be able to get the 100% perfection for your device as a sure thing. But, it doesn’t, mean that you cannot have a Oculus Quest 2 blurry vision either. If you adjusted the Oculus Quest 2 for sweet spot without the glasses on your face, this can be the reason. You are going have to adjust for the sweet spot with the glass on. If you can’t fix that with the glass on, you will have to purchase the custom lens adapters from the dealers.

Use The IPD Settings Well

What happens on the Oculus Quest 2 lenses is to magnify the images and the media on the LCD panel. The magnification should happen according to a specific ratio which you should adjust. Since the LCD display is smaller than it seems, you will have to struggle to focus on the sweet point. Therefore, you have to adjust the Fresnel lenses and find the right IPD settings that you can find with.

If you have tried all the IPD adjustments (58, 63 and 68mm) and none of them worked, you should try for the tweaking to set the values between 1.5 and 2.5 which can fix your Oculus Quest 2 blurry problem.

If you have defective lenses, you will get a business on the image quality. First you should check if the error is for just one lense or for both the lenses. To check that, you may simply close one eye and then check the other lense and do this for both eyes. If you can figure it somehow, you will have to replace the lenses as a sure thing. The best thing is to claim for new lenses if you have the warranty period in effect. Other than that, the Oculus Quest 1 or another fit will come in handy as a quick solution.

Adjust The Headset According To Your Specs

Although you earlier saw had not any issue and now you are feeling it, this might be the reason. Due to the belt loosening, your eyes might not be getting the pictures well.

One of the positive ways to happen the Oculus Quest 2 blurry is the damaged parts. Although you have not recognized it yet, you r devices might have hit hard on the surfaces causing damages to the inner parts. If you don’t remember such times, you will be able to use the damaged outer signs for those incidents.

The Oculus Quest 2 is a sensitive devices although it delivers an awesome experience in the end, its sensors another electric parts cannot bear hard vibrations or hits on the hard surfaces. Therefore, you might have to replace the damaged parts by the authorized dealer. That will not be a problem, if you have not violated the warranty policy.

Increase The Sharpness Of The Device

If you are struggling to see the depths and edges of the images along with the blurriness, the adjustment of the sharpness will be able to make things clear for you. You should go to settings and then increase the texture quality. This can be performed using the mobile device as well. When it comes to the higher blurred image quality, this will not be useful.

What have been mentioned in the text are 10 ways to fix the Oculus Quest 2 blurry problems you might face. You should start form the very first and then move to other explanations to find the best solution. Also, the following FAQs will be able to give some sort of assistance to you. If you still can’t find a proper answer, you will have to refer the authorized dealer or the customer care for the assistance.

Is it possible to fix my Oculus Quest 2 with its blurring fault?

Of course you can. Some of the fixes don’t take even a minute which help you to fix that. If you read the article well, you must have found more than few ways to fix your blurry Oculus Quest 2.

Is the Oculus Quest 2 worth to buy?

Although it has minor issues such as Oculus Quest 2 blurry, you don’t have to put away an embracing VR experience. According to most of users, it is one of the best VR headsets in the world. Along with it features, it is always a-must-use product.

There is not just one reason but many such as being lighter, clearer, smarter, and less expensive than the Oculus Quest 1.

What are the other errors in the Oculus Quest 2 that the users have faced?

Except its blurry vision, the devices has not been to host severe errors that a user cannot fix. When it comes to some common errors, not being able to connect to Wi-Fi, Set Up incomplete error, not charging, lost tracking and device is not pairing are a few of the errors.

What is the easiest way to fix the Oculus Quest 2 blurry vision?

If you see a blurriness on the devices, you will be able to fix it by increasing the texture quality. According to shared experiences, more than 25% of users have been able to fix their issues.

How can I overcome Oculus Quest 2 blurry error when my IPD is 70 plus?

If you have the Oculus Quest 2 blurry for your 70+ IPD, you will have be able to enjoy a quick hack. First you should 3rd setting on the IPD and then hold a magnet over the headset to trigger the sensor of the headset. This will create an alternative IPD on the devices. You should hold the devices on to your face until it reaches the preferred value.